Behind the Scenes Before I Go LIVE 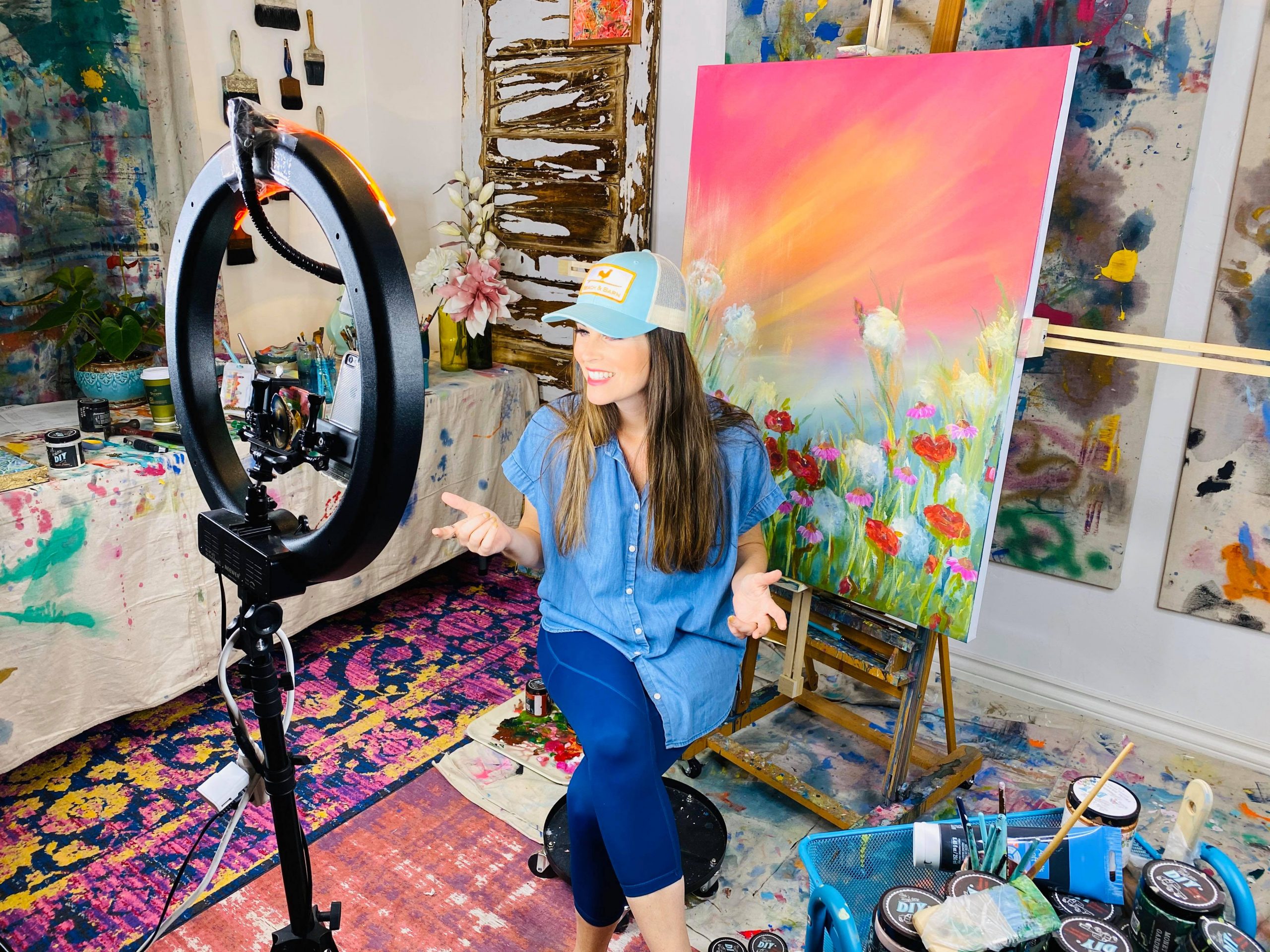 Going live is simultaneously one of the easiest and most complicated processes ever. It’s easy because it only takes a few minutes to get ready and being live really just consists of sitting in front of a phone and pushing “go live,” but it looks complicated to anyone who hasn’t been doing it for awhile.

I decided to break down what it looks like behind the scenes when I go live so that, hopefully, anyone who feels intimidated by the process can see that it’s just a matter of plugging in a few things!

First, the set up: 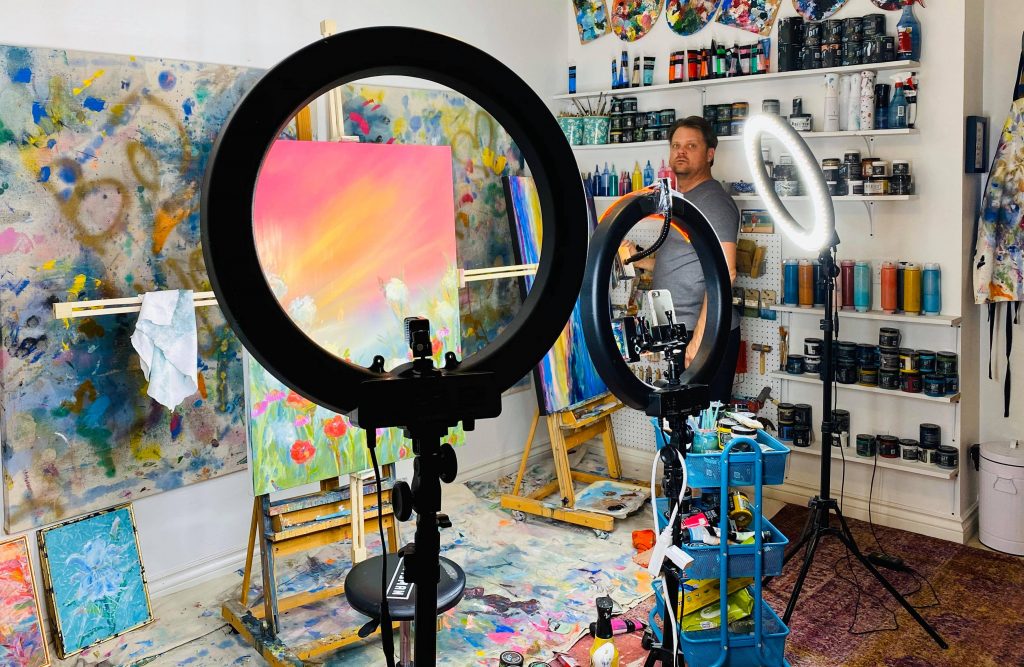 The most important part of going live is LIGHT! Lots and lots of LIGHT! Like, SO MUCH LIGHT y’all. Like Ina Garten says, “natural is better but, if you’re out, store bought is fine.” These are my favorite ring lights to use because they’re simple to set up and they have their own tripod– which means I don’t have to do much but plop them down and plug them in. 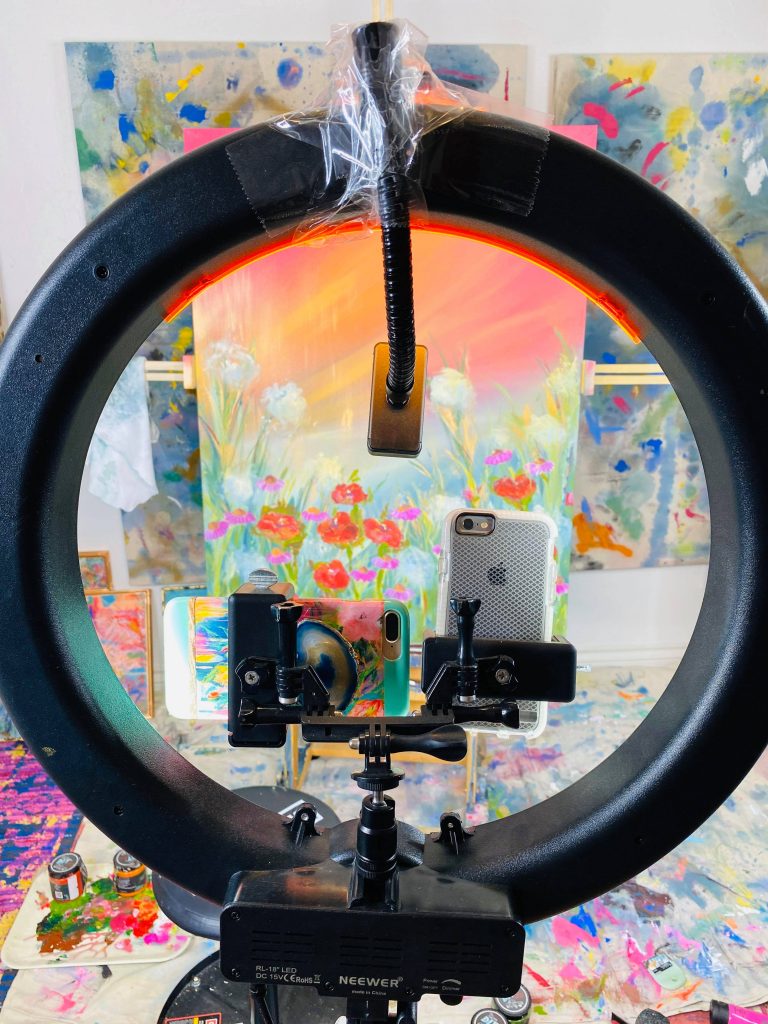 This might be what my sons would call “extra” but my tripod has two phone clamps and I’ve added a third with a very secret method called lots of tape. I use three phones because I try to go live on three platforms simultaneously: Instagram, Facebook, and YouTube but that doesn’t mean you have to do it that way! The important thing to remember is orientation. Some platforms, like Instagram, prefer your phone to be in portrait (vertical) mode only and some, like YouTube, look better when your phone is in landscape (horizontal) mode. 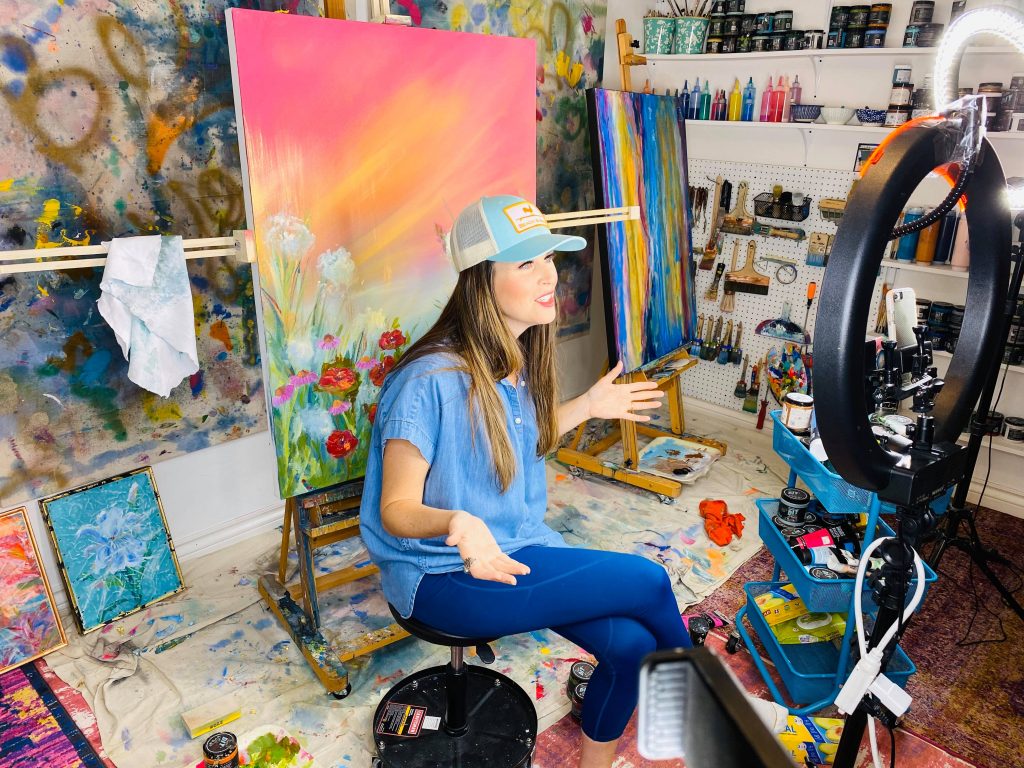 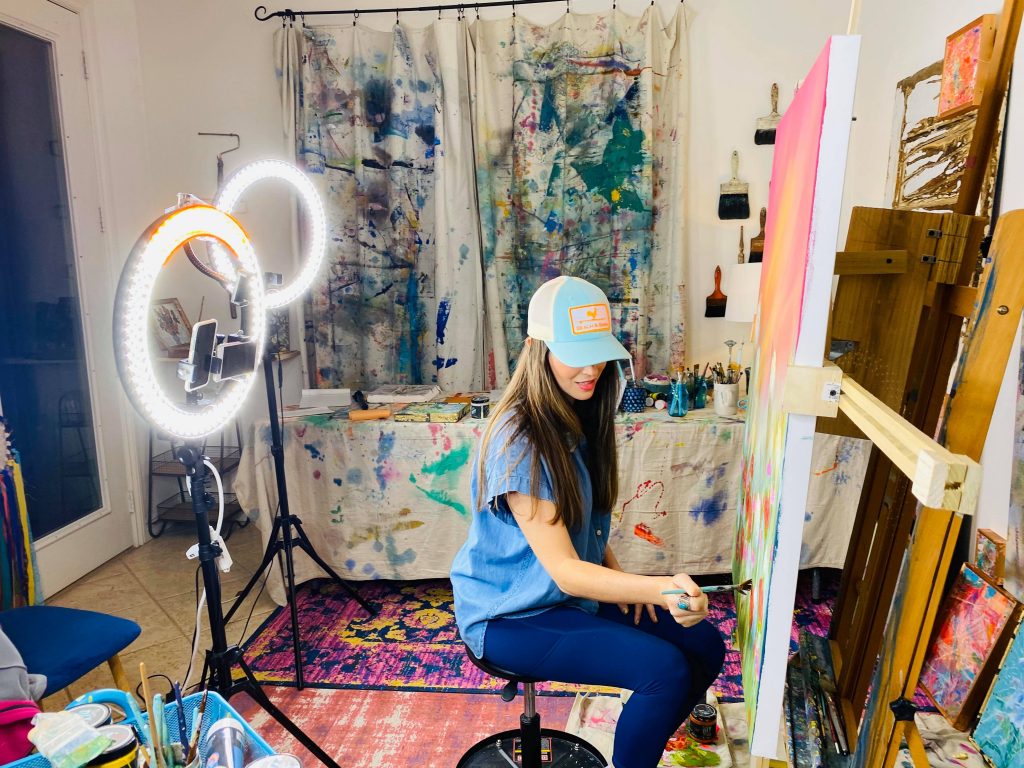 In that first picture, you can see that I’m looking slightly upwards toward the cameras. This is the most flattering angle because it prevents shadows from falling across your face, allowing the viewer to see you better. When I turn away from the camera to paint, you can see how much distance is between the camera and my canvas. The higher angle and slight distance make it easier for viewers to see the whole piece. I use a stool to make it easier to transition between looking at the camera and looking at my canvas. 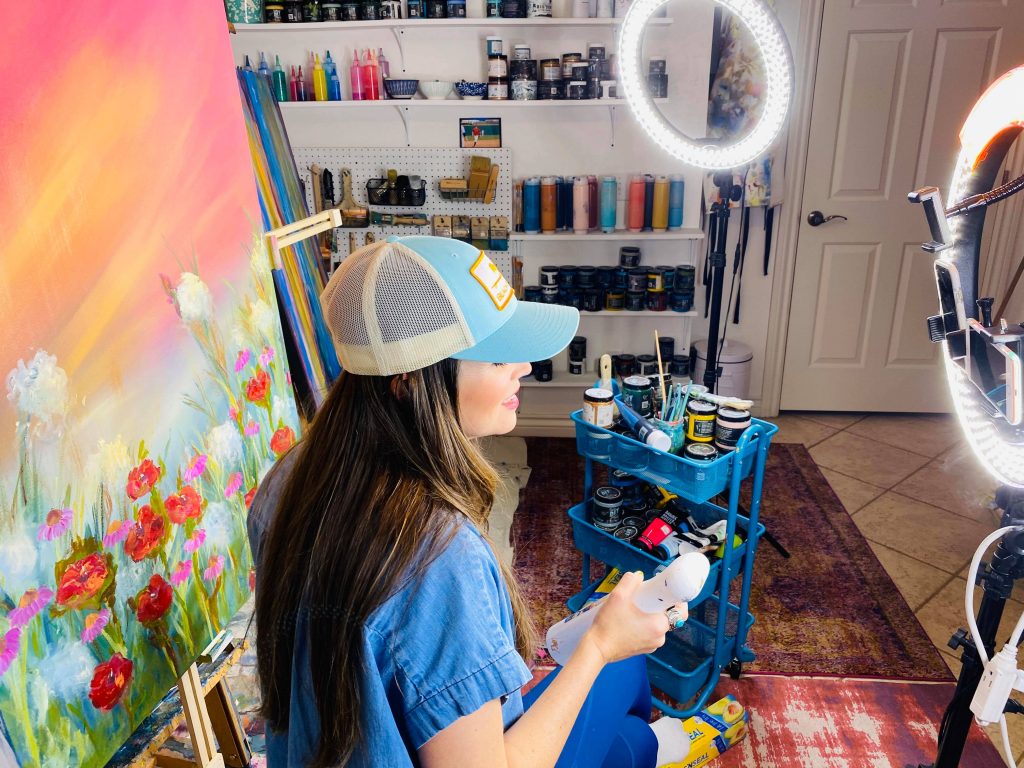 This is especially important to remember for creatives and anyone who plans on doing a demonstration live. You’re going to want everything you need close by because nothing will KILL a live video faster than you walking off screen because you forgot something. Sorry sister, but no one wants to stare at a blank canvas while you hunt for the right stencil. I also recommend that you grab supplies you might not even need because there are times when INSPIRATION strikes and you come up with an outside-the-box idea. The same thing goes for anyone who is doing makeup or cooking tutorials, it’s just better to be over-prepared!

The rule in film is to never “break the 4th wall” by looking directly at the camera. Going live is the exact opposite of that!! Even though it’s really tempting to look at yourself (is there something in my teeth?!), you should always look at the camera. It helps you connect more with the viewers, which is the whole reason why we go live in the first place!

That’s it! That’s everything that happens behind the scenes before I go live. The last step is to just hit that “go live” button!

Facebook lives have been HUGE for my business! You’re not going to find any tool that’s as cheap (AKA FREE!), easy to use, and powerful as this one. Now go for it! 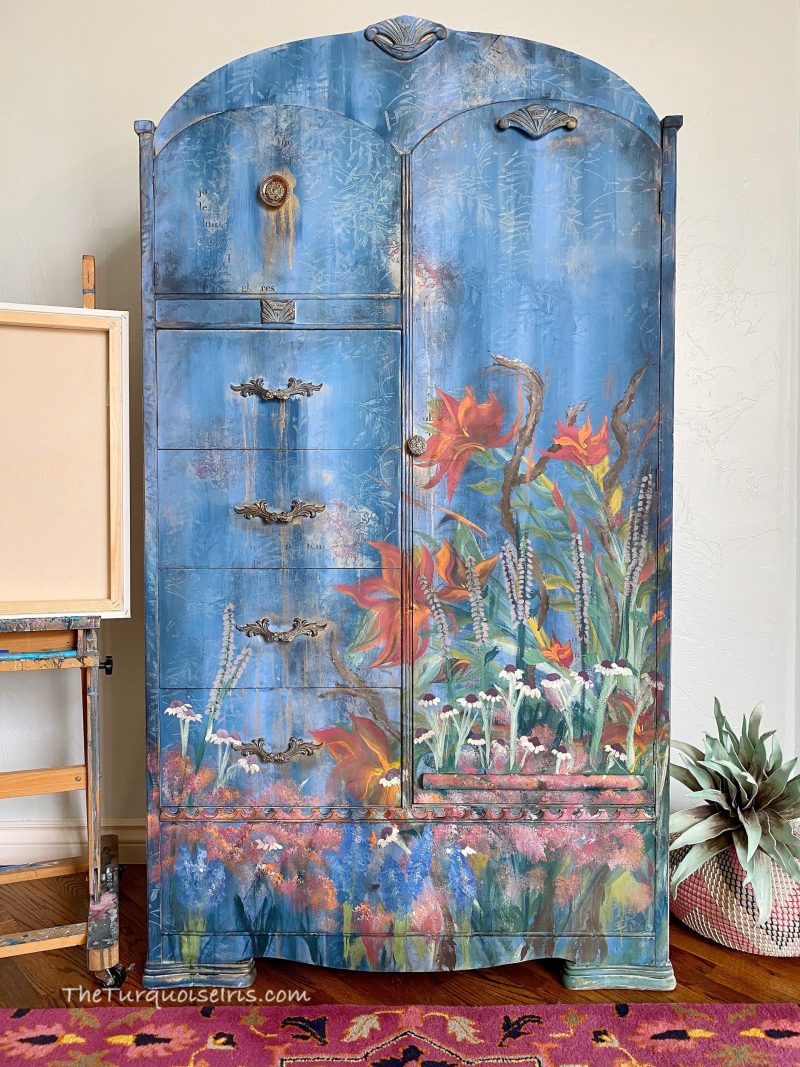 Get a FREE DIY Tutorial!

Join our mailing list and receive my DIY Tutorial, "How to blend more than one paint color with Wild Blue" for FREE!

A $77 value at your fingertips.